Livepatch patches are managed using tiers. Tiers are basically containers that patches are put into. Each livepatch client instance is associated with a specific tier (via the token). After deployment the server comes with a default tier list: edge, beta, candidate and stable. This list can be modified using the livepatch administration tool. 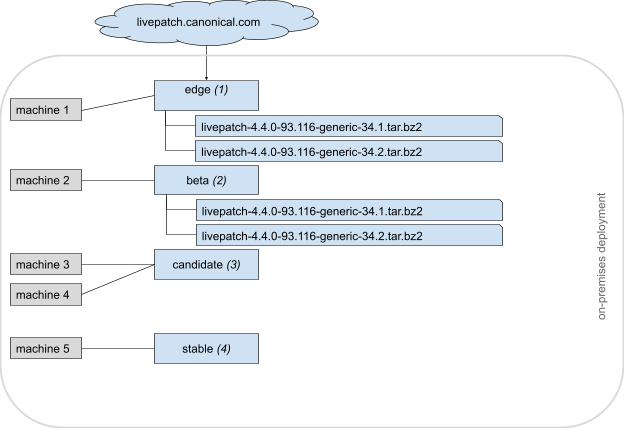 The tiers form an ordered list. When the on-prem server pulls in patches from Canonical’s servers, these patches are initially assigned to the first tier in the list. The order of tiers in the output of the livepatch admin tool command is in the order of patch promotion, in this example the edge tier is the initial tier patches will be assigned to:

If no further validation of patches is necessary, all livepatch client instances can be associated with that tier and the patches will become available to them as soon as they have been downloaded.

If, however, validation or a staggered rollout of patches is required, the patch tiers can be used to implement that. In such a scenario, a small portion of testing machines can be associated with the beta tier and patches can be promoted to higher tiers once they have been validated. 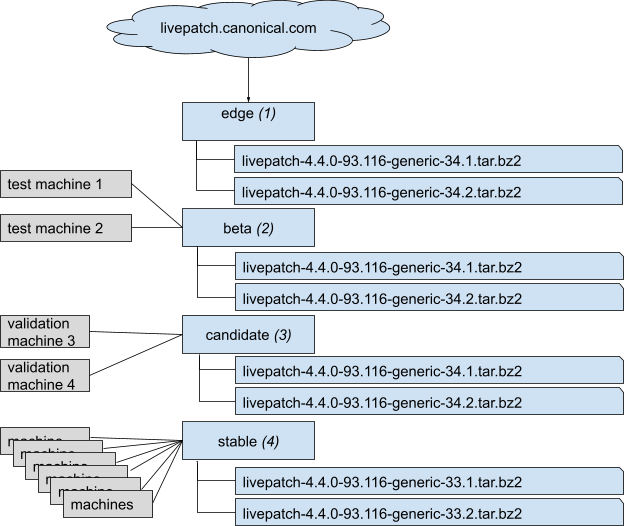 To promote a patch to a different tier, use the command:

Promoting all patches in a tier

To promote all patches in one tier to another, there is a shortcut command promote-all:

This tool is useful during the initial setup of livepatch on-prem, when all patches are imported into the edge tier and other tiers are empty. By running livepatch-admin patch promote-all edge stable, you can make the contents of all the tiers from edge to stable identical.

Last updated 1 year, 4 months ago. Help improve this document in the forum.