A definition of High Availability Clusters from Wikipedia:

High-availability clusters (also known as HA clusters , fail-over clusters or Metroclusters Active/Active ) are groups of computers that support server applications that can be reliably utilized with a minimum amount of down-time.

They operate by using high availability software to harness redundant computers in groups or clusters that provide continued service when system components fail.

Without clustering, if a server running a particular application crashes, the application will be unavailable until the crashed server is fixed. HA clustering remedies this situation by detecting hardware/software faults, and immediately restarting the application on another system without requiring administrative intervention, a process known as failover.

As part of this process, clustering software may configure the node before starting the application on it. For example, appropriate file systems may need to be imported and mounted, network hardware may have to be configured, and some supporting applications may need to be running as well.

HA clusters are often used for critical databases, file sharing on a network, business applications, and customer services such as electronic commerce websites.

HA cluster implementations attempt to build redundancy into a cluster to eliminate single points of failure, including multiple network connections and data storage which is redundantly connected via storage area networks.

HA clusters usually use a heartbeat private network connection which is used to monitor the health and status of each node in the cluster. One subtle but serious condition all clustering software must be able to handle is split-brain, which occurs when all of the private links go down simultaneously, but the cluster nodes are still running.

If that happens, each node in the cluster may mistakenly decide that every other node has gone down and attempt to start services that other nodes are still running. Having duplicate instances of services may cause data corruption on the shared storage.

HA clusters often also use quorum witness storage (local or cloud) to avoid this scenario. A witness device cannot be shared between two halves of a split cluster, so in the event that all cluster members cannot communicate with each other (e.g., failed heartbeat), if a member cannot access the witness, it cannot become active. 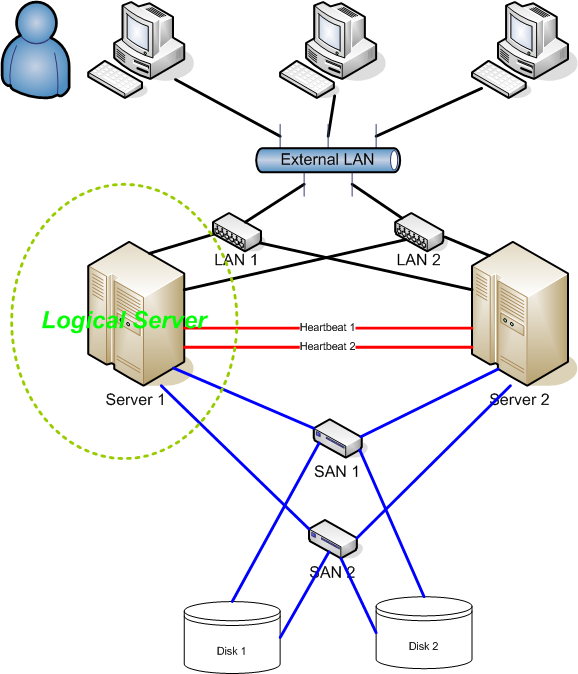 Fencing protects your data from being corrupted, and your application from becoming unavailable, due to unintended concurrent access by rogue nodes.

Just because a node is unresponsive doesn’t mean it has stopped accessing your data. The only way to be 100% sure that your data is safe, is to use fencing to ensure that the node is truly offline before allowing the data to be accessed from another node.

Fencing also has a role to play in the event that a clustered service cannot be stopped. In this case, the cluster uses fencing to force the whole node offline, thereby making it safe to start the service
elsewhere. The most popular example of fencing is cutting a host’s power.

There are many upstream high availability related projects that are included in Ubuntu Linux. This section will describe the most important ones.

The following packages are present in latest Ubuntu LTS release:

Packages in this list are supported just like any other package available in [main] repository would be.

Packages in this list are supported just like any other package available in [universe] repository would be.

Packages in this list are only supported by the upstream community . All bugs opened against these agents will be forwarded to upstream IF makes sense (affected version is close to upstream).

Packages in this list aren’t necessarily HA related packages, but they have a very important role in High Availability Clusters and are supported like any other package provide by the [main] repository.

The server guide does not have the intent to document every existing option for all the HA related softwares described in this page, but to document recommended scenarios for Ubuntu HA Clusters. You will find more complete documentation upstream at:

A very special thanks, and all the credits, to ClusterLabs Project for all that detailed documentation.

Last updated 2 months ago. Help improve this document in the forum.