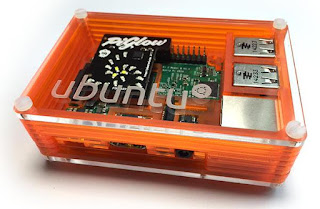 But have you ever wanted to run classic (apt/deb) Ubuntu Server on a RaspberryPi2? 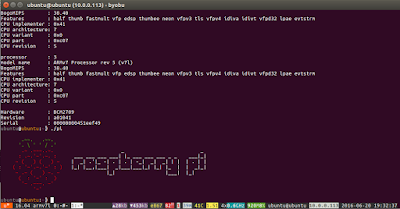 Well, you’re in luck!  Follow these instructions, and you’ll be up in running in minutes!

Now, write it to a microSD card using dd.  I’m using the card reader built into my Thinkpad, but you might use a USB adapter.  You’ll need to figure out the block device of your card, and perhaps unmount it, if necessary.  Then, you can write the image to disk:

Now, pop it into your rpi2, and power it on.

If it’s connected to a USB mouse and an HDMI monitor, then you’ll land in a console where you can login with the username ‘ubuntu‘ and password ‘ubuntu‘, and then you’ll be forced to choose a new password.

Assuming it has an Ethernet connection, it should DHCP.  You might need to check your router to determine what IP address it got, or it sets it’s hostname to ‘ubuntu’.  In my case, I could automatically resolve it on my network, at ubuntu.canyonedge, with IP address 10.0.0.113, and ssh to it:

Again, you can login on first boot with password ‘ubuntu‘ and you’re required to choose a new password.

On first boot, it will automatically resize the filesystem to use all of the available space on the MicroSD card — much nicer than having to resize2fs yourself in some offline mode!

Now, you’re off and running.  Have fun with sudo, apt, byobu, lxd, docker, and everything else you’d expect to find on a classic Ubuntu server 😉

Heck, you’ll even find the snap command, where you’ll be able to install snap packages, right on top of your classic Ubuntu Server!  And if that doesn’t just bake your noodle…

Learn how Ubuntu Core and snaps gives Domotz a competitive advantage As the number of IoT devices scale, the challenges of provisioning and keeping them up to...

For a while now, snapd has supported the ability to install and use multiple instances of the same snap in parallel. This allows users to test features in new...