I'm proud to blog about the availability of a new technical paper that describes in detail, and based on many examples, how to use hardware supported cryptography on IBM Z and LinuxONE systems explicitly with Ubuntu Server 16.04 LTS (but applies to other Ubuntu Server for s390x releases, too).

Several people from IBM worked on this (see below) - and I personally had the pleasure to join this crowd as the 'voice' and 'pen' from Canonical/Ubuntu.

The document became much more than just a paper, I think it's a general reference on how to use and exploit hardware-assisted clear key crypto operations on current IBM Z technology (generation EC12/BC12 and higher) using Ubuntu Server with OpenSSH, Apache HTTP server and IBM Java.

The paper is available via IBM Techdocs WP102721 (no sign-on needed): 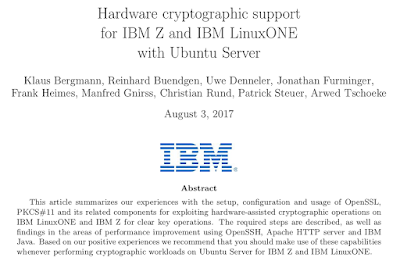 This is yet another great example that shows the powerful combination of Ubuntu Server running on IBM Z and LinuxONE hardware.

How to protect your data, applications, cryptography and OS – 100% of the time

Businesses looking to maximise the security, reliability, efficiency and performance of their essential, mission-critical applications are recognising the...

Migrating to enterprise servers with Ubuntu on IBM Z

For mission-critical applications, security, reliability, and efficiency are essential. Linux excels in these areas, which is why it has become a highly...

Earlier this month, Canonical, IBM and FinTech specialists Medici held a joint roundtable in New York for executives within the financial services sector to...