Being able to upgrade Ubuntu from one version to the next is one of Ubuntu’s best features. You benefit from getting the latest software, including new security patches, and all the upgraded technology that comes with a new release without having to reinstall and reconfigure your system.

When can I upgrade?

Ubuntu users are prompted to upgrade at different times depending on their current release.

Users on interim releases such as Ubuntu 21.10 are prompted to upgrade within a few days of the next Ubuntu release becoming available. This prompt may happen automatically, or when checking for new updates.

Users on a Long Term Supported release such as Ubuntu 20.04 LTS will be prompted to upgrade once the first point release of the following LTS is available. For Ubuntu 22.04 LTS this prompt will appear once Ubuntu 22.04.1 LTS is available, usually around 3 months after launch.

Once this happens the upgrade path will be identical to the steps detailed in the primary tutorial path.

However, Ubuntu 20.04 LTS users can still upgrade today, as detailed in the section towards the end of this tutorial ‘Upgrading from 20.04 LTS to 22.04 LTS early’.

Getting ready to upgrade

Before proceeding ensure that your software is up to date by running:

From your terminal, entering your password and pressing Y when prompted.

Also ensure that all of your user data has been backed up. Whilst it is unlikely that data will be lost during the upgrade process, it’s better to be safe than sorry. 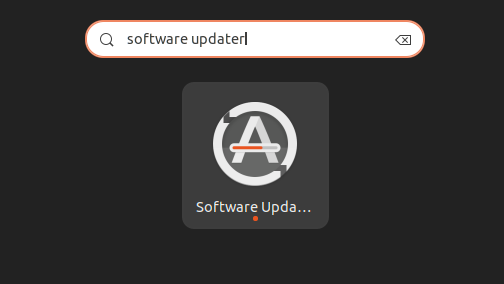 You can find the Software Updater in your application menu. This will check for updates and prompt you to upgrade if it finds a more recent Ubuntu release. If no upgrade prompt appears, you are either on the latest version of Ubuntu or upgrades to the newest release have not yet been enabled.

Please Note: If you are trying to upgrade to an interim release in future (such as the upcoming Ubuntu 22.10). You may need to change your Update settings for the prompt to appear. See ‘Upgrading to interim releases’ at the end of this tutorial.

If the Software Updater finds additional updates, install them prior to upgrading and restart your machine if needed.

Once you have no additional updates to apply. Click Upgrade… to proceed.

From this point on, the upgrade UI will guide you through the process. First you will see a link to the release notes for the target release, detailing the newest features, improvements and known issues. 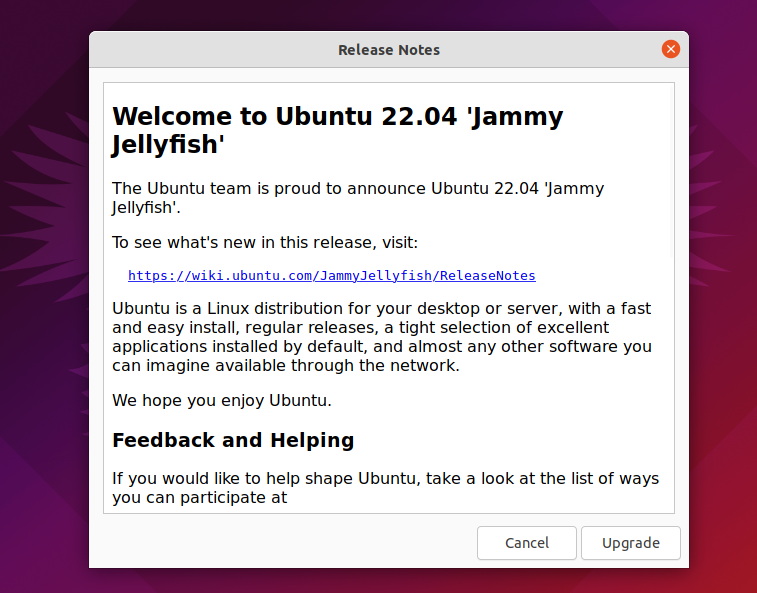 This will take you to an overview window showing you the progress of the upgrade. 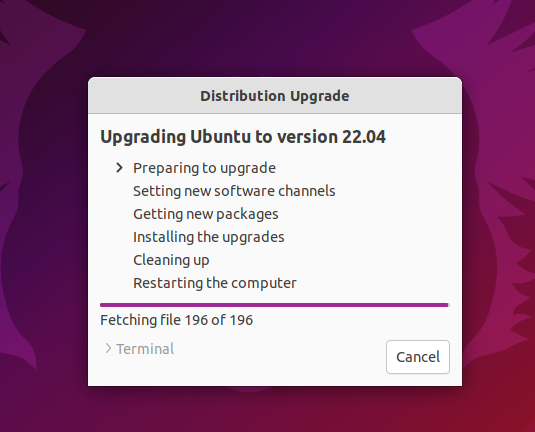 As this progresses through the stages you will receive some additional prompts to progress once the upgrade requirements have been gathered. 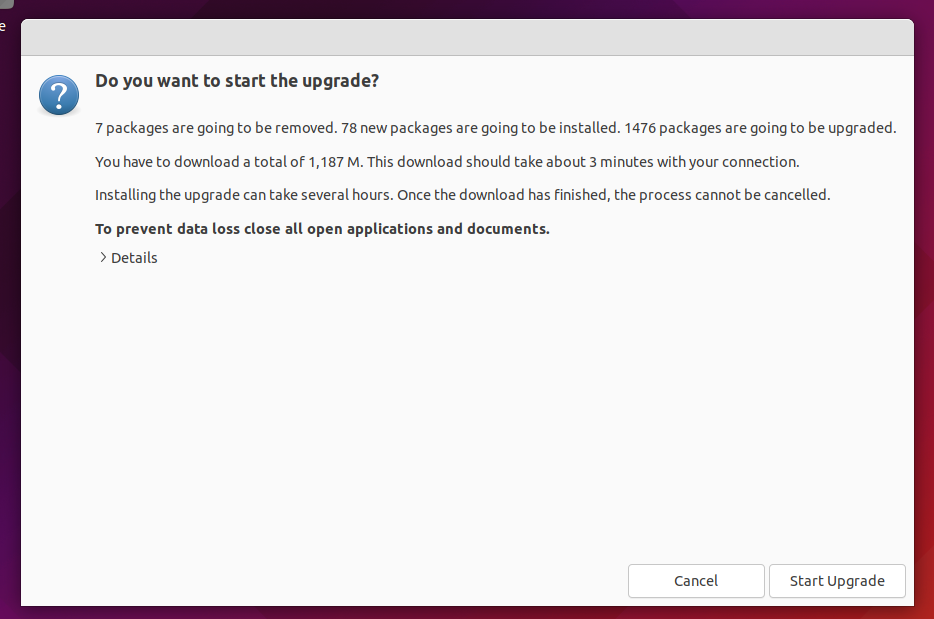 To prevent the OS locking during the process, the lock screen will be disabled. 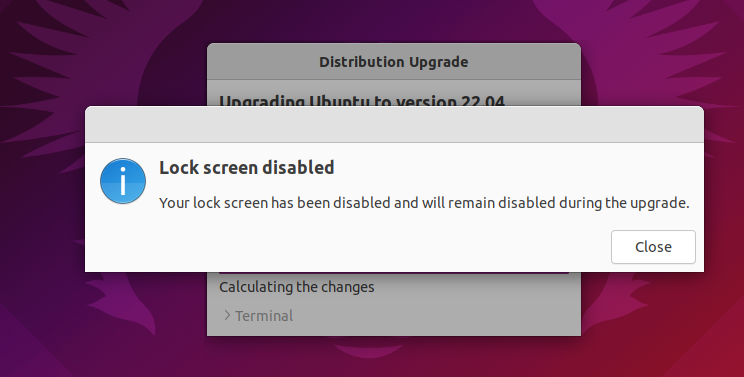 Once the newest packages have been installed you’ll be prompted to remove the obsolete packages from the previous Ubuntu release. 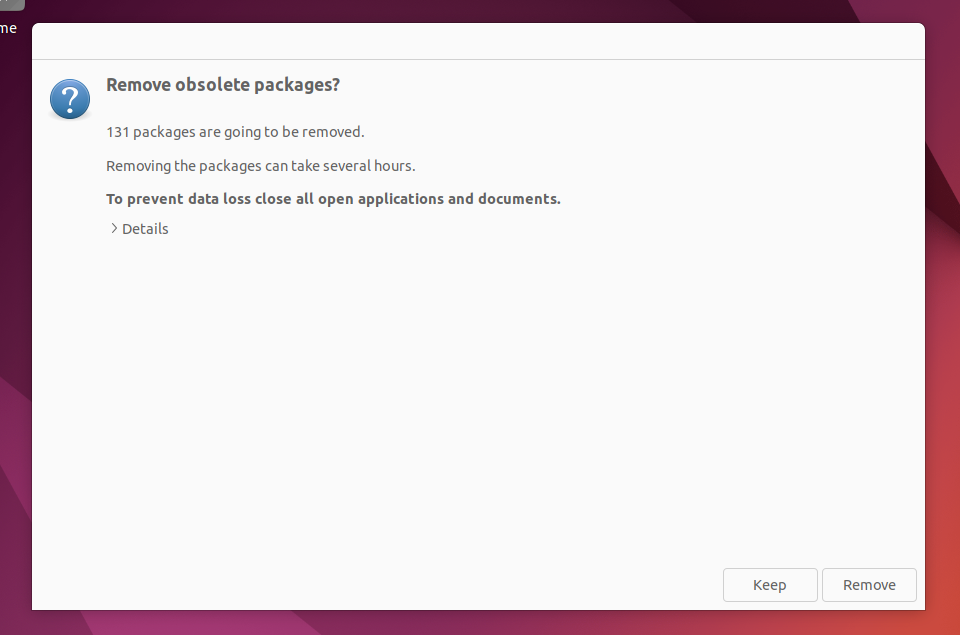 You can choose to keep them, but by default it’s okay to click Remove to progress.

Despite the warning that removing packages can take several hours, this is extremely unlikely and after a minute or two you will be prompted to restart your system to complete the upgrade. 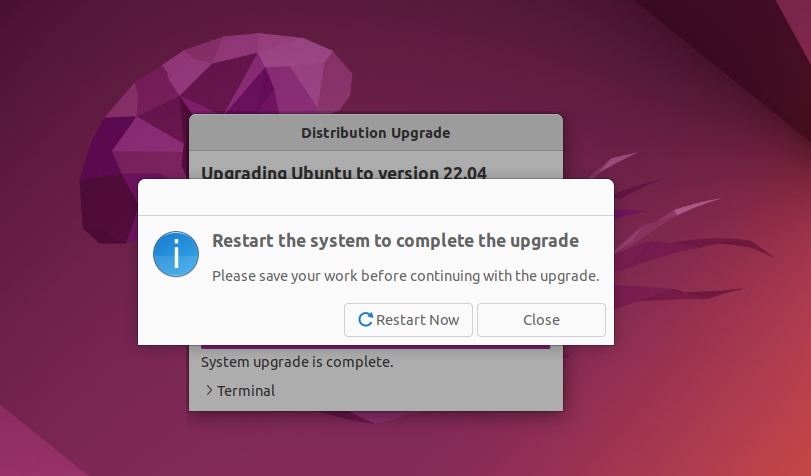 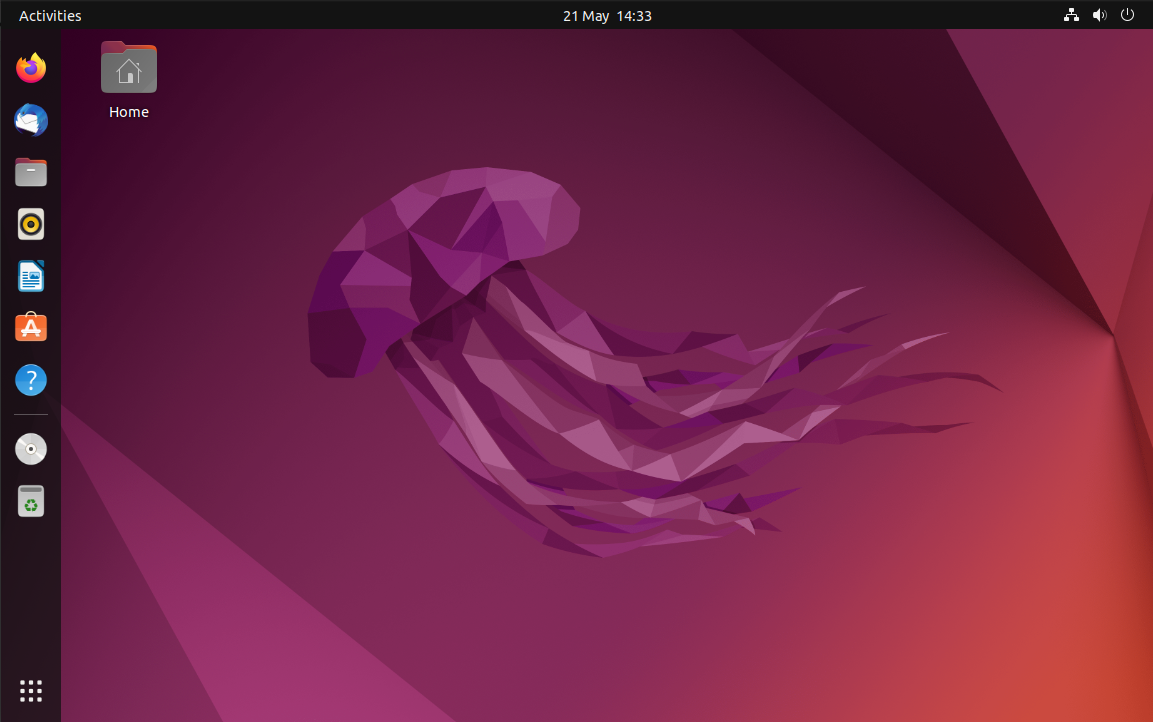 That’s it! Your machine may be slower to reboot during this final step as it completes the initial configuration but after that you’ll be up and running with the latest release of Ubuntu. We hope you enjoy all the new features and functionality it has to offer!

Help is always at hand.

If you have any issues with your upgrade process, or get stuck along the way, you can always reach out to our community.

As mentioned, upgrade prompts to move from one Ubuntu LTS release to another are enabled once the .1 release of the latest LTS is available.

However it is still possible to upgrade before this date using the command line! If you are comfortable with the terminal then follow the instructions below. If you are not as familiar with the Linux CLI, it may be better to hold off until the upgrade prompt is enabled.

The command used to upgrade Ubuntu from the CLI is:

This will check for a new release and prompt you to upgrade. However, if you run this prior to the upgrade path being enabled you will get this message. 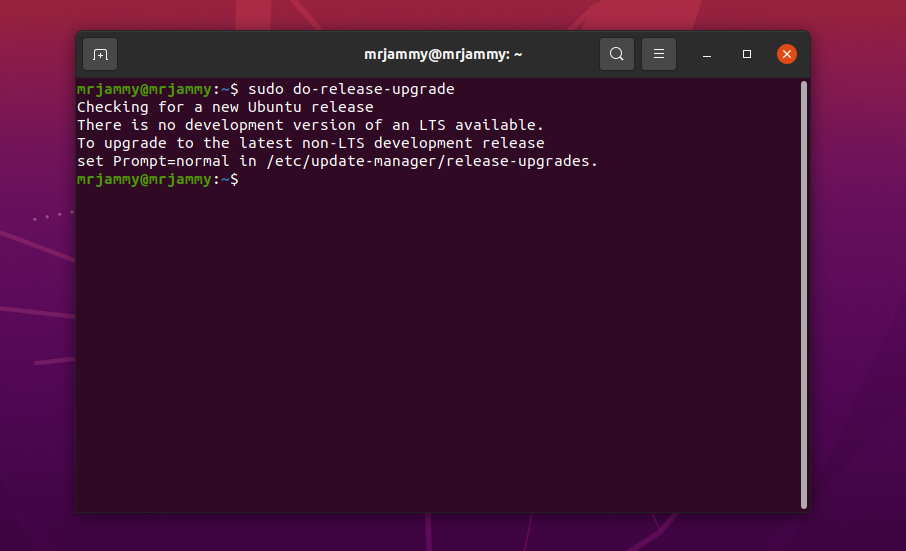 This means we need to add some modifications to the command.

The first is -d . This allows us to upgrade to a ‘development’ release. Usually it is used by early testers to try Ubuntu versions ahead of their official release, however if you run this from Ubuntu 20.04 LTS it will upgrade to the official, stable version of Ubuntu 22.04 LTS.

Note: If you have modified the Updates menu in Software & Updates to notify you ‘For any new version’ (see the interim release section later) this instruction will upgrade you to Ubuntu 21.10 by default. You will need to revert this to ‘For long-term supported versions’ to get to Ubuntu 22.04 LTS. See the screenshot below for how this menu should look before running the above commands:

Also Note: If you run do-release-upgrade -d from an Ubuntu 22.04 LTS release it will prompt you to upgrade to the in-development version of the next interim release, Ubuntu 22.10 (Kinetic Kudu) ahead of it becoming available in October this year. We recommend not doing this on your primary system as this is for testers only!

The second option we recommend is -f DistUpgradeViewGtk3. This triggers the graphical UI seen above. Let’s run it now: 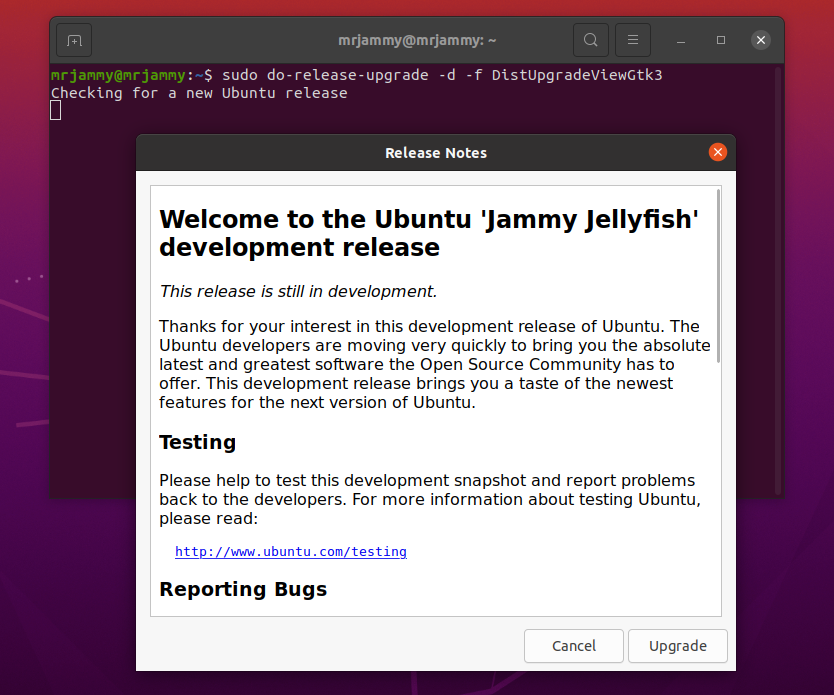 As you can see this takes you onto the same upgrade path as the primary tutorial, so we’ll leave you to take it from there!

Upgrading via the command line

If you prefer you can simply use the -d command to upgrade directly from the command line. The flow is similar but takes place entirely within the terminal. 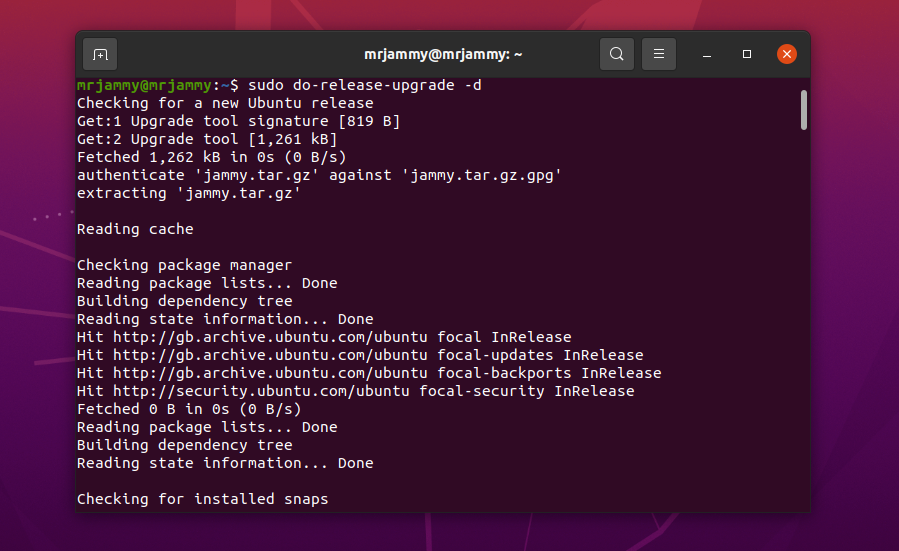 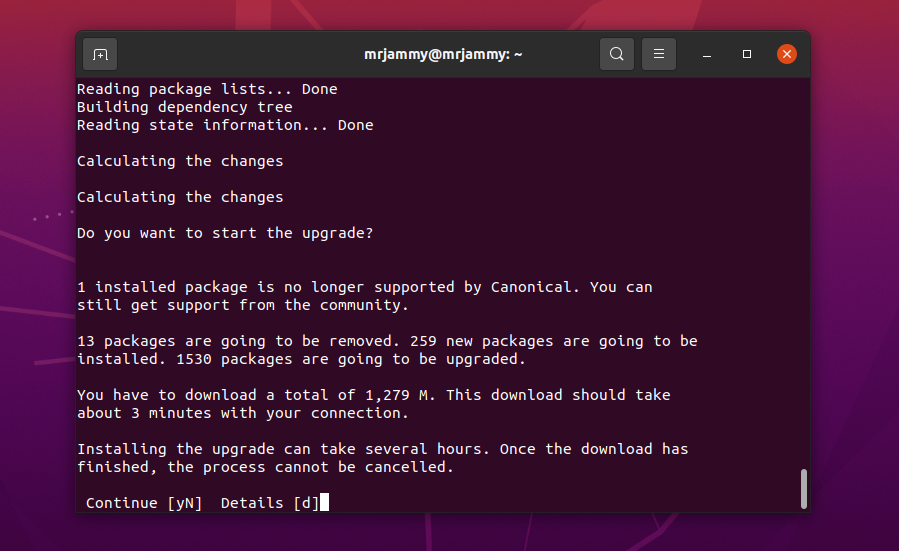 Type y to continue the process after the initial command. 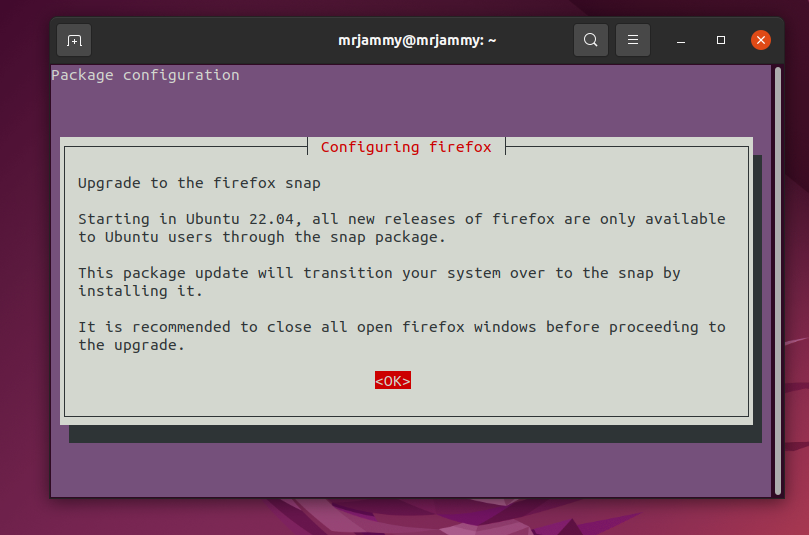 For Ubuntu 22.04 LTS, the default Firefox browser now ships as a snap maintained by Mozilla, this prompt lets you know that the previous version of Firefox will be replaced. 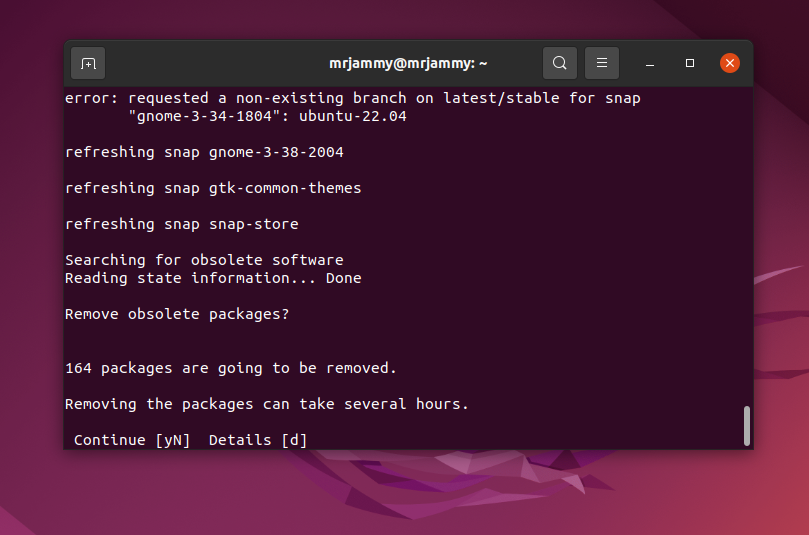 Then type y when you are prompted to remove obsolete packages (or N if you wish to keep them).

The final step is to restart, as we did in the primary tutorial flow. 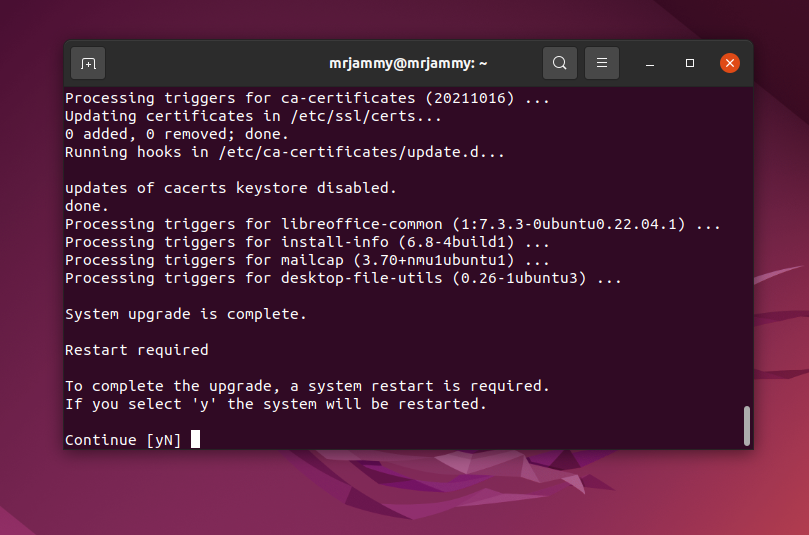 Type y and then you’re done! 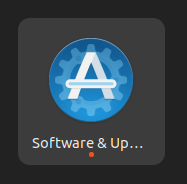 Navigate to the ‘Updates’ tab and change the menu option titled ‘Notify me of a new Ubuntu version’ to For any new version.

With this setting applied you will receive the same upgrade prompt for Ubuntu 22.10 as we saw at the beginning of this tutorial, once it has been officially released.