To get us up and running with Arduino, we are going to install the Arduino IDE, a program that will help us write code for the Arduino, and run our code on the board.

2. Installing via a tarball

We can download the latest version of the Arduino IDE from the Arduino website (here) as a tarball. A tarball is a type of compressed folder, like a .zip file, commonly used to distrubute software in Linux; its file extension is usually .tar.xz (or .tar.gz, if it uses Z compression. We’ll get to this later).

In order to extract the files we need from the tarball, we can open a terminal, cd to where the downloaded tarball is, then run

where FILENAME is the name of the download (typically arduino-(version number)-linux64.tar.xz).

The command can be read as * eXtract from an archive… * Verbosely (meaning it prints the name of every file it finds)… * from a file given by FILENAME.

cd into the folder; there will be a file named install.sh in the folder. To install the IDE, execute install.sh with

If the script executes correctly and outputs done! at the end of its output, the IDE was installed correctly! Let’s try to launch it in the next step.

Installing via apt
While there is a package for the Arduino IDE on current APT repositories, it has not been updated for a while. As such, while it is still possible to install the IDE by running sudo apt install arduino, it is not recommended to do so, as asking for support when using outdated software is more difficult.

Before launching the IDE, connect your Arduino board to your computer with a USB cable.

Arduino should be available in the (Unity menu?); if not, it can be launched from the command line by running arduino.

The first time we launch Arduino, a window will pop up asking to add us to the dialout group: 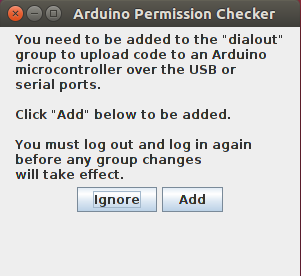 We will get back to what this means later, but for now just click on Add.

After that, we should see the IDE’s main editor window. 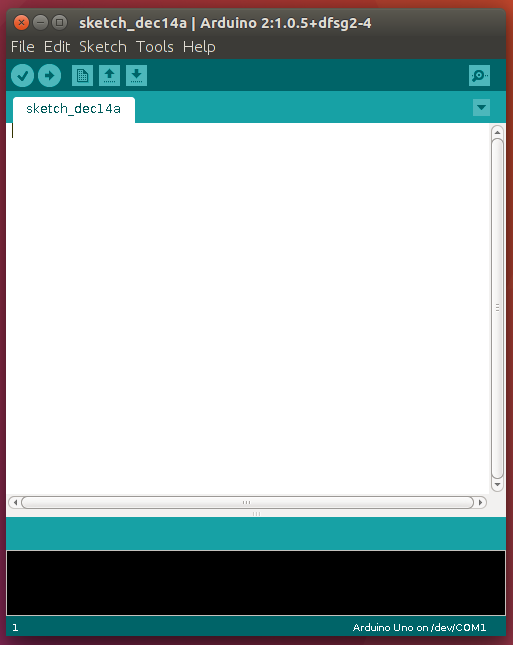 The IDE comes with example files that we can use to test if everything works. Let’s try open one such file: Under File > Examples > 01.Basics, choose Blink.

Try running the code on your Arduino by clicking Upload (the right arrow along the top).

We should get an error:

But if we try following the suggestion in the error above, the Serial Port menu is greyed out and can’t be entered. 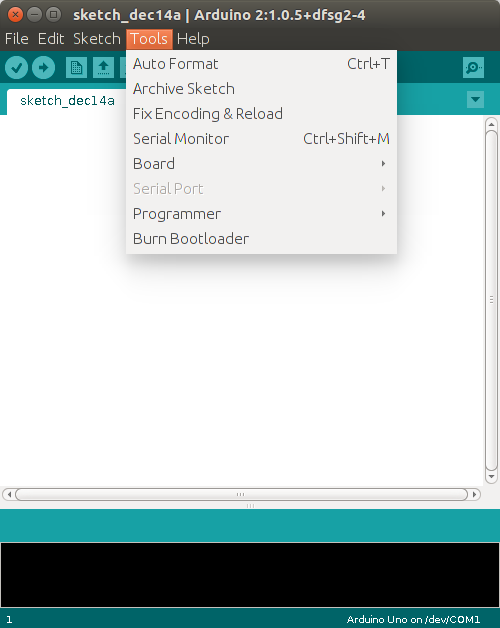 This is happening because the IDE doesn’t have sufficient permissions to access the Arduino device.

We can look at the Arduino device by running

in a terminal. The output looks mostly like this:

The ‘0’ at the end of ‘ACM’ might be different, and multiple entries might be listed, but the parts we need to focus on are the string of letters and dashes in front, and the two names root and dialout.

In short, nobody except root and members of dialout can do anything with the Arduino; since we aren’t running the IDE as root or as a member of dialout, the IDE can’t access the Arduino due to insufficient permissions.

Adding yourself to the dialout group

But wait! Earlier, when we were launching the IDE, we did add ourselves to the dialout group!

So why does the IDE still not have permission to access the Arduino?

After you log back in and launch the Arduino IDE, the Serial Port option should be available; change that, and we should be able to upload code to the Arduino. 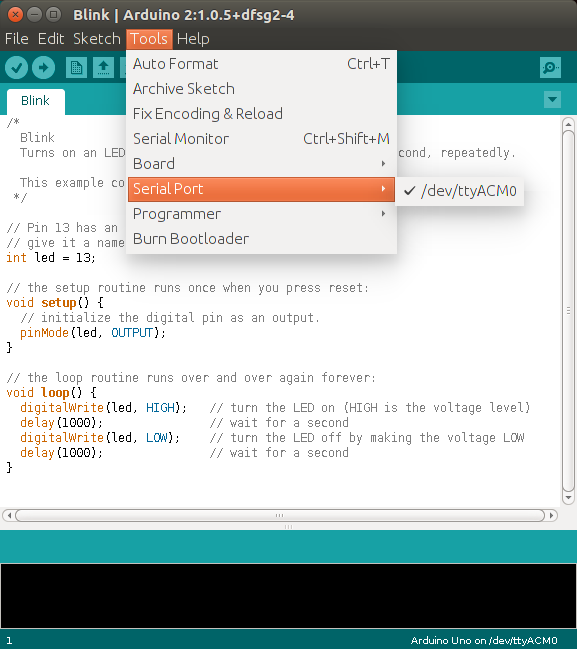 Congratulations, you made it!

You’ve just installed the Arduino IDE on your computer; you’ve also learned how permissions and groups work in Linux!