We are going to illustrate how to build some Intel RealSense SDK samples on an Ubuntu Core image using the classic snap. You will be able to hook up on your Intel Joule and build the samples, explore some of the code and try them!

How will you use this tutorial?

What is your current level of experience?

Note: other GNU/Linux distributions are currently in the process of building packages for snapcraft.

You will be provided with a link to a tar.bz2 file containing the SDK and all samples, we are going to detail its content here, but let’s download and extract the content first!

This will download the SDK and you will get a progress bar confirming it so. Once done, let’s extract its content:

Now that we have the SDK extracted, let’s look in detail to its content and build it!

As building the whole SDK and dependencies is quite a long process, let’s start building it right away before looking at its content.

This process will take a very long time, let’s use that opportunity to open a second ssh connection to the board, and ensure that you will get your Intel RealSense camera recognized:

Note: this is the only change that needs to be done outside the classic snap, as we need system services like udev to know about it.

You can now unplug and plug back your Intel RealSense camera. It will be detected by the system.

While the build is proceeding, let’s look at the files extracted from the bz2 archive:

Beignet is an open source implementation of the OpenCL specification - a generic compute oriented API. This code base contains the code to run OpenCL programs on Intel GPUs which basically defines and implements the OpenCL host functions required to initialize the device, create the command queues, the kernels and the programs and run them on the GPU. The code base also contains the compiler part of the stack which is included in backend/.

OpenCV (Open Source Computer Vision) is a library of programming functions mainly aimed at real-time computer vision. It has C++, C, Python and Java interfaces and supports Windows, Linux, Mac OS, iOS and Android. OpenCV was designed for computational efficiency and with a strong focus on real-time applications. Written in optimized C/C++, the library can take advantage of multi-core processing. Enabled with OpenCL, it can take advantage of the hardware acceleration of the underlying heterogeneous compute platform

This project is a cross-platform library (Linux, Windows, Mac) for capturing data from the Intel® RealSense™ F200, SR300, R200, LR200 and the ZR300 cameras. This effort was initiated to better support researchers, creative coders, and app developers in domains such as robotics, virtual reality, and the internet of things. Several often-requested features of RealSense™ devices are implemented in this project, including multi-camera capture.

This project contains a certain number of samples, where you can get raw data from the camera. Those are built from the general build script. We’ll detail some of them in the next step.

Intel® RealSense™ Person Library provides the ability to sense and recognize people, understand what they do, and interact with them.

SLAM is tailored for, although not limited to, robots: Autonomous robot navigation requires the ability to build a high precision map of the surrounding environment and enable the robot to locate itself in the map for path planning and routing purposes.

SLAM uses the visual-inertial sensor of the RealSense camera to estimate odometry and concurrently builds a map. The constructed map can be used by applications to detect obstacles, label locations, and plan paths.

The SDK provides functionality of record and playback of camera streams for test and validation.

The SDK includes libraries which support the camera stream projection of streams into a common world-space viewpoint, and libraries which enable the use of multiple middleware modules simultaneously for common multi-modal scenarios.

We are going to detail the available samples in the next section!

On ubuntu desktop, you can run any examples you want (graphical and non graphical). Most of the samples are rendering some graphical UI. Those have the rs_ prefix for realsense SDK and cpp_ prefix for those using librealsense (the bare protocole).

Ubuntu Core, on itself, doesn’t have any graphical server by default. Consequently, you can’t run most of the samples rendering some graphical UI. However, there are a lot of samples with a _web appendix. They are spawning a web interface that you can access to the network, showing you real time data and capture from the camera.

You can focus and experiment on both kind of examples.

Here is an example with rs_pt_tutorial_1_web:

Then, point your browser to http://localhost:8000/view.html (or a remote IP if you are trying to browser from a different machine) and you will get something like: 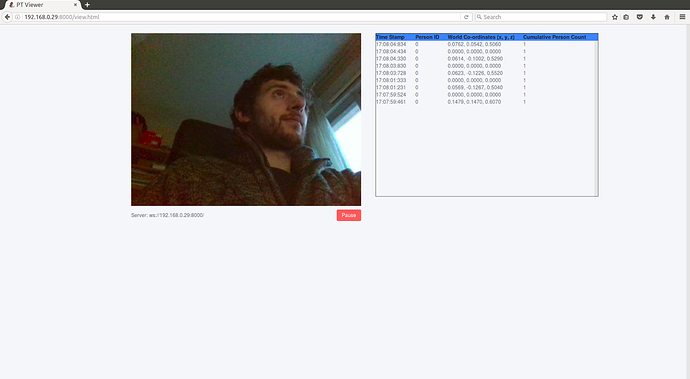 The corresponding code is in ~/realsense_sdk_beta3/build/realsense_samples-0.6.2/samples/pt_tutorial_1_web/cpp/main.cpp

You can spend some times here to study the various SDK examples in the same samples/ directory and execute them one after another. All corresponding commands will be prepended with rs_. librealsense samples are prepended with cpp_ and their code is in realsense_sdk_beta3/build/librealsense-1.11.2/examples/.

Congratulations! You have played with the Intel RealSense SDK, installed and enabled it on your Ubuntu Core image in the Joule. You now have as well some samples and looked at some code on using the SDK.

You should by now be familiar with the various parts composing the SDK, what each of them is responsible for and some basic ideas on how to use them. You also know what features the Intel RealSense supports and have some samples on how to utilize them.