Since virt-manager requires a Graphical User Interface (GUI) environment it is recommended to be installed on a workstation or test machine instead of a production server. To connect to the local libvirt service enter:

You can connect to the libvirt service running on another host by entering the following in a terminal prompt:

The above example assumes that SSH connectivity between the management system and the target system has already been configured, and uses SSH keys for authentication. SSH keys are needed because libvirt sends the password prompt to another process.

When using virt-manager it is always important to know the context you look at.
The main window initially lists only the currently defined guests, you’ll see their name, state and a small chart on cpu usage. 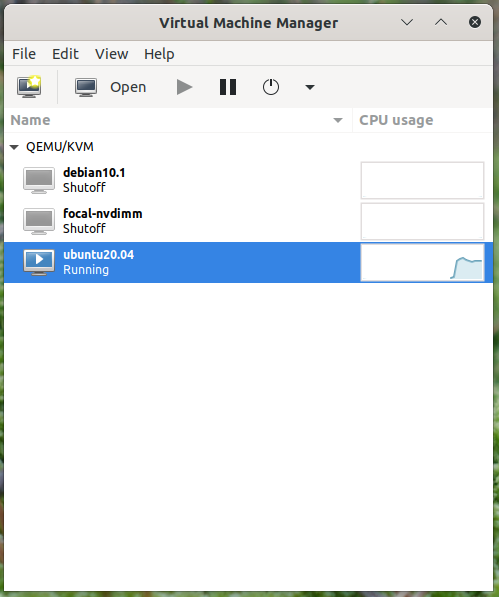 On that context there isn’t much one can do except start/stop a guest.
But by double-clicking on a guest or by clicking the open button at the top one can see the guest itself. For a running guest that includes the guests main-console/virtual-screen output. 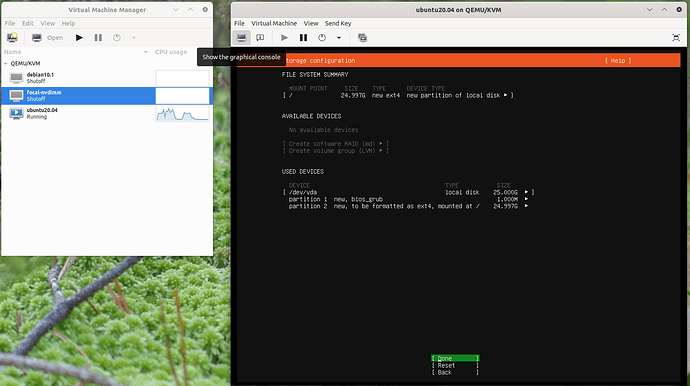 If you are deeper in the guest config a click in the top left onto “show the graphical console” will get you back to this output.

virt-manager provides a gui assisted way to edit guest definitions which can be handy.
To do so the per-guest context view will at the top have “show virtual hardware details”.
Here a user can edit the virtual hardware of the guest which will under the cover alter the guest representation. 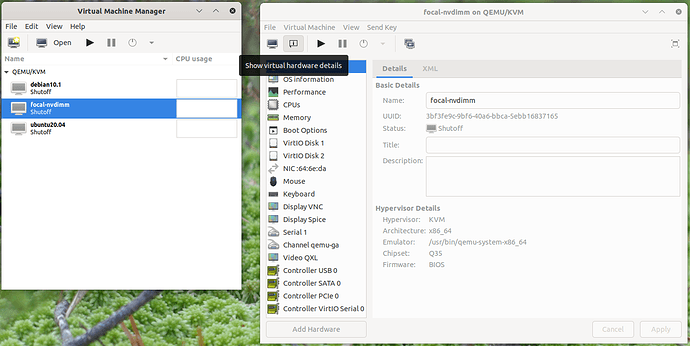 The UI edit is limited to the features known and supported to that GUI feature. Not only does libvirt grow features faster than virt-manager can keep up - adding every feature would also overload the UI to the extend to be unusable. To strike a balance between the two there also is the XML view which can be reached via the “edit libvirt XML” button. 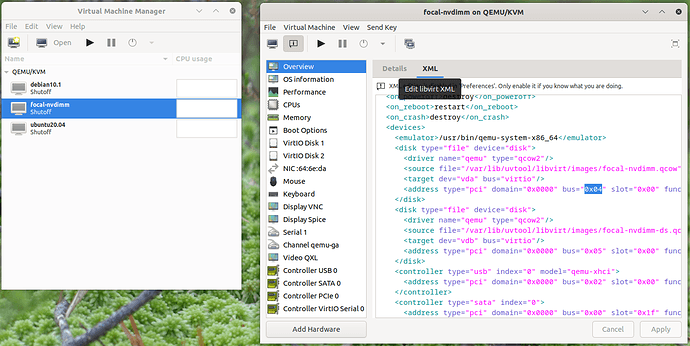 By default this will be read-only and you can see what the UI driven actions have changed, but one can allow RW access in this view in the preferences.
This is the same content that the virsh edit of the libvirt-client exposes.

The virt-viewer application allows you to connect to a virtual machine’s console like virt-manager reduced to the GUI functionality. virt-viewer does require a Graphical User Interface (GUI) to interface with the virtual machine.

To install virt-viewer from a terminal enter:

The UI will be a window representing the virtual screen of the guest, just like virt-manager above but without the extra buttons and features around it. 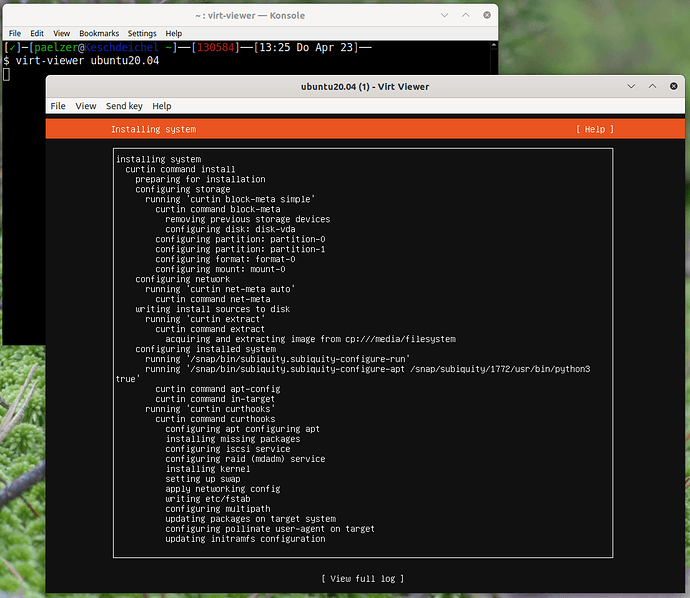 Similar to virt-manager, virt-viewer can connect to a remote host using SSH with key authentication, as well:

Be sure to replace web_devel with the appropriate virtual machine name.

If configured to use a bridged network interface you can also setup SSH access to the virtual machine.

virt-install is part of the virtinst package.
It can help installing classic ISO based systems and provides a CLI options for the most common options needed to do so. To install it, from a terminal prompt enter:

There are several options available when using virt-install. For example:

There are many more arguments that can be found in the man page. Explaining those of the example above one by one:

After launching virt-install you can connect to the virtual machine’s console either locally using a GUI (if your server has a GUI), or via a remote VNC client from a GUI-based computer.

The virt-clone application can be used to copy one virtual machine to another. For example:

Also, use -d or --debug option to help troubleshoot problems with virt-clone.

Replace focal and with appropriate virtual machine names of your case.

Warning: please be aware that this is a full clone, therefore any sorts of secrets, keys and for example /etc/machine-id will be shared causing e.g. issues to security and anything that needs to identify the machine like DHCP. You most likely want to edit those afterwards and de-duplicate them as needed.

Last updated 6 months ago. Help improve this document in the forum.