Ubuntu Core 22 (UC22) and Ubuntu Core 20 (UC20) are built on the foundations of Ubuntu 22.04 LTS (Jammy Jellyfish) and Ubuntu 20.04 LTS (Focal Fossa), respectively. These are the current generation of Ubuntu Linux for embedded devices.

The kernel, boot assets, runtime environment, applications and device enablement capabilities are all delivered as snaps that are controlled by snapd (the snap daemon), which is itself packaged as a snap.

See below for how these elements combine in Ubuntu Core: 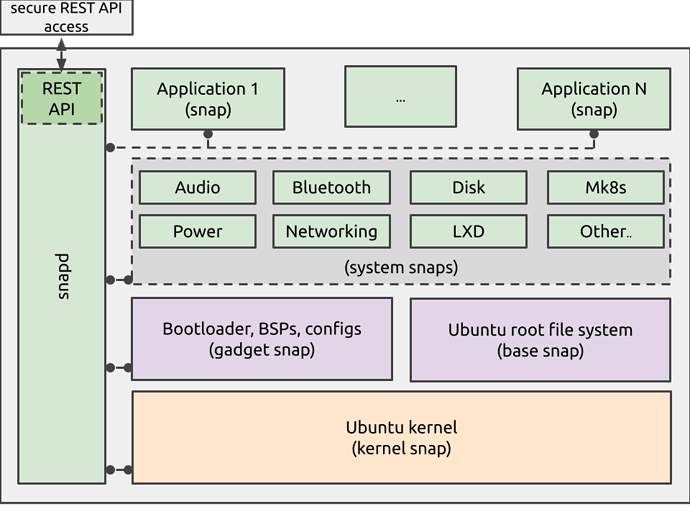 The above snaps are combined using the ubuntu-image tool to create the Ubuntu Core installation image.

See Snaps in Ubuntu Core for a general overview, and see below for details on the UC2x specific configuration.

The storage layout of the generated image used to install Ubuntu Core, and the resultant storage on the device, is described by the gadget snap and its associated gadget.yaml file.

snap-bootstrap is the main executable that is run during the early initramfs booting stage of UC2x. It has the following responsibilities:

There are several layers of isolation that make snaps strictly confined.

The first layer of isolation is logical: a snap is a self-contained file system mounted on a Linux system. Snaps are immutable with least privileges by default, which make it easy to build tamper-proof devices.

Isolation mechanisms rooted in the Linux kernel add an additional layer of isolation through Cgroups and Namespaces:

See Security and sandboxing for further details on how confinement is implemented.

Last updated 2 months ago. Help improve this document in the forum.