On Tuesday 9th of April I gave a little talk at Mozilla’s “Designing in the Open” event. Along with the rest of the speakers I was asked to prepare a 10 – 15 minutes talk and to be prepared for a discussion to follow.

In preparation for the talk I spoke to a few people – designers and engineers – and one of them (@sil) said: “I hope you are going to publish this somewhere”. So here I am.

To help stimulate some discussion I decided to present some truths. You will have to wait for my follow up posts for something with more answers than questions! 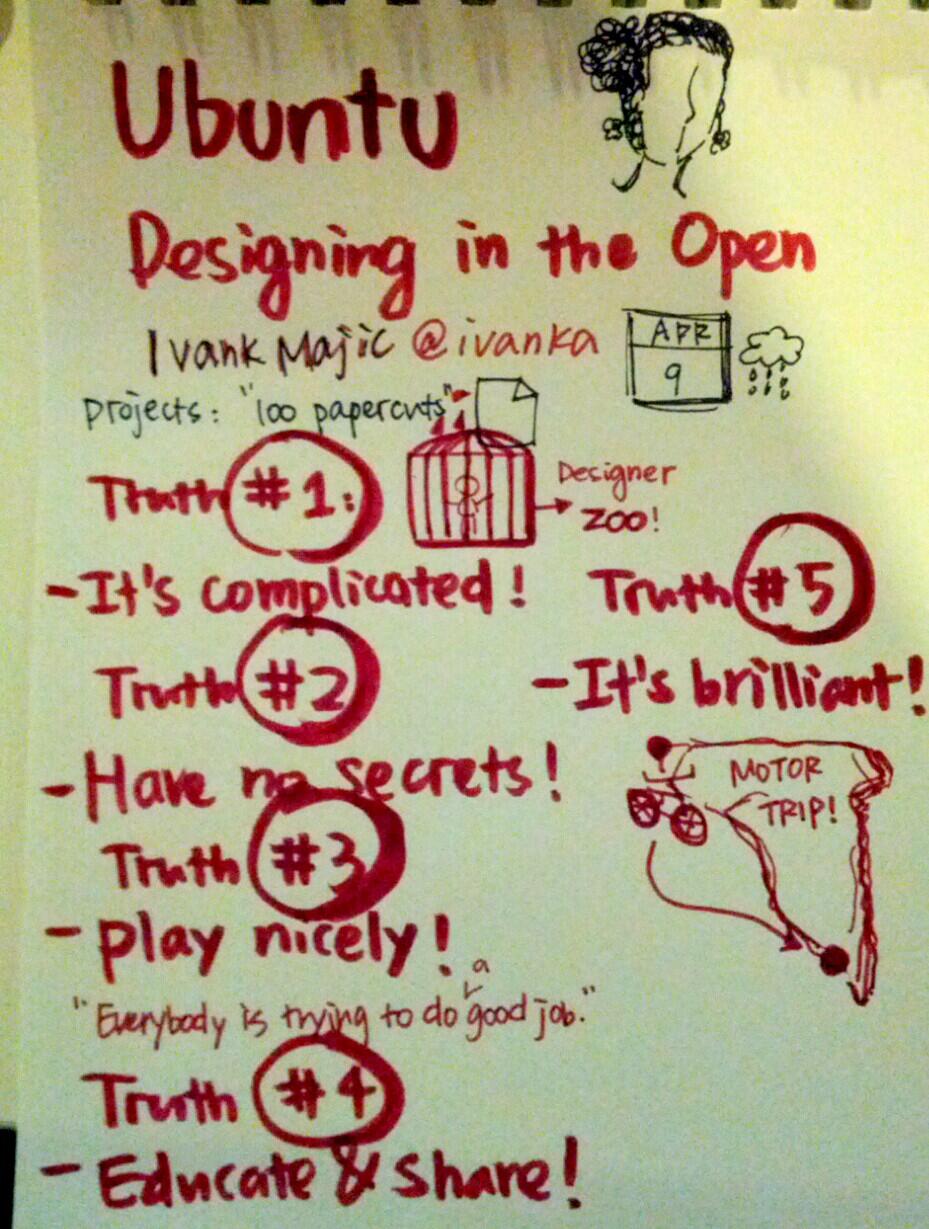 Thank you for the fantastic illustration @zhenshuofang

Design in the open is an ambiguous term behind which hides an endless stream of potential pitfalls, challenges and rewards.

It is complicated not just in the practical sense of not sitting in the same country, nevermind the same office, as the people you are working with.

I’ll go a bit stronger, design in the open is in my view an ill defined term which is why it is often such a contentious and emotionally fraught activity. I don’t want to get too philosophical but there are some questions that definitely need to be considered before you embark on a project to design something in the open.

Why design in the open? What is it that you hope to gain from doing this? What do you think your co-contributors are going to gain? Why do you want to make something in the open?

Do you really mean build something in the open? I would argue that design and engineering are both integral parts of making something and therefore to make that thing well you should never talk about the two activities as somehow divorced.

Something can be made in secret and still be completely open-source.

Do we mean everyone has a voice in the open? Because that is what it feels like to me. I don’t think people want to necessarily participate in a design process but rather they want to be heard. They want to feel included and like they have some influence and control.

When I first joined Canonical and Ubuntu I had this awful emotional pressure to do what felt like sitting in some sort of zoo that hosts design so that people could watch me work. “In this cage you will see a group of designers using what they call ‘post-its’. They can often be seen engaging in this activity where they stick them on walls and argue with each other about what should be written on them and how they should be grouped.”

Is that how design needs to be done to be truly open?

@mpt put it as: “the real issue is how much delay is there between someone having an idea and it appearing in the public and whether people who are not in the same room can get involved early enough to make a difference.”

That’s true and sometimes it isn’t possible for everyone to get involved in everything and that should be OK too. I have opinions on whether or not the Ubuntu Dash should be engineered in NUX or QML and I like my opinions to be heard but I don’t expect to actually have direct influence.

Are we talking about design in the open as in OpenIDEO or do we mean design in an existing open-source community?

I do have some very specific thoughts and suggestions around this but I will provide them in a second post!

Truth #2: Have no secrets

If you want to design in the open you can’t have secrets. You can’t operate in a world of partial disclosure. It is an additional burden that quickly gets sidelined. It is too hard. There can be no trust and therefore there can be no real collaboration.

Since I joined Canonical in March 2009 we have been pursuing a design strategy of cross device convergence. Most of our work – and even the fact we have been doing it – has been confidential. This year we have gone public with our phone and tablet story and already it is approximately a million times easier to organise work with our community. I say a million but I might actually mean 2 million. You see, if your design strategy isn’t truly public then how can you explain your design direction? And, in an open-source environment which claims to be a meritocracy how can you properly justify your actions if you can’t tie them back to a clear design strategy?

The flipside is that in a world where a tada moment is still a useful promotional tool, can you ever have full disclosure and, if not, how can you work around that?

Over the years (nearly 40 of them!) of school then work and life in general I have come to the conclusion that most people don’t get up in the morning and say to themselves: “Today I would like to be mediocre.”

One thing that is hard with doing anything in the open is that it seems quite a number of people appear to assume that people *do* get up in the morning wanting to be mediocre or worse, that everyone else *is* mediocre (or worse!). It is another truth, but one that doesn’t justify a number of its own, that it seems easier to make that negative assumption when you are sitting in front of a computer writing a comment, filing a bug or writing to a mailing list.

This works all sorts of ways round. From people on my team coming back from a Google Hangout and saying: “the developers had some really good ideas!” or a classic following an internal sprint: “you know, I really enjoyed myself hanging out with the developers this week, they are really a lot of fun!” to the developers saying things like: “I didn’t realise you guys actually cared about Ubuntu!”

One could argue that if you are going to take a walk down a busy street then you should be prepared for people to bump into you, but in reality social norms exist which help us walk along a busy street without incurring actual injury.

I know what meritocracy means and I also know that some merit takes time to show and proving it is not always a case of: “your code compiled and you passed the code review”. Wikipedia asks us to assume good faith, let’s do that and also remember that you don’t actually need to shoulder barge to make your way down a crowded street.

In order to work with people you need to communicate. Starting with the word design, moving on to the word open, and then through words like wireframe, mood board, sketch, distro, motu, if these words don’t have the same meaning to everyone who is trying to use them then you can’t actually have a conversation!

It is very hard to collaborate if you can’t communicate. Take the time to explain what you are doing how and why.

Have evidence-based conversations. Not because you need to prove yourself – that can be a really negative thing to carry around with you all the time – , but because it helps people learn. Engineers like to – need to – break problems down into tiny parts so that they can build them, help them break down and understand your ideas.

This is the best truth of all. I get to work with some outstanding – if not awesome – people. Vish, Sense, Thorwil, Jason de Rose, and so many other who are community volunteers who have helped me deliver.

Being part of the community itself is an experience that I don’t know how it would be possible to replicate elsewhere. Some of you may know that I travelled from Alaska to Argentina on a motorcycle and the open-source (note, not just Ubuntu) community helped me more than once. The most amazing example of which was the help we got from the Central America Software Libre guys and girls. We were in El Salvador and one of the bikers we met travelling had some bad news from home and needed to leave urgently. The problem was what to do with his bike and gear and how to organise flights etc. I spent 45 minutes on email and IRC (thanks to the 3G dongle I borrowed from the owner of the hostel we were in) and in that time people had volunteered secure parking in San Salvador and Managua (thanks @tatotat, @leogg and @n0rman and everyone else!)

I agree that my story is more an opportunity to tell tales of my trip (can you really blame me?) but making the effort to be part of a community is more than just lines on your CV and that bit actually is awesome (pronounced with a British English accent to give it gravitas).

These engineers I work with, they like to make things work. They go “WOW, this is going to be the best clock app in the world ever!” And then they go off and make it. Just like that. In their spare time!

The second iteration of this year is the last one before our mid-cycle sprint next week. Here’s a short summary of the work the squads in the Web & Design...

This is the final iteration of the year. The team has worked exceptionally hard to produce a number of new projects and initiatives. Here is a shortlist of...

This was a fairly busy two weeks for the Web & design team at Canonical.  Here are some of the highlights of our completed work. Web squad Web is the squad...